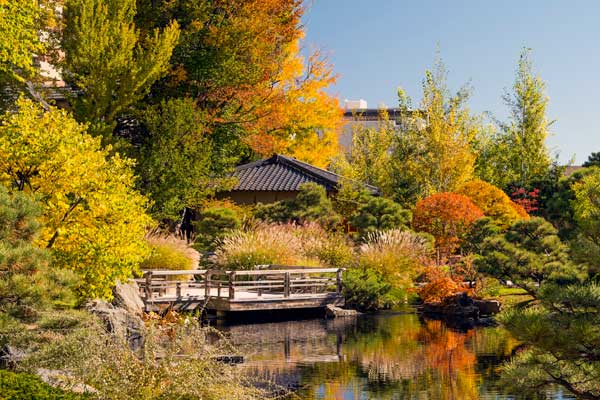 The Japanese Garden was designed by distinguished landscape architect, Dr Koichi Kawana. Dedicated June 23, 1979, the design is a perfect example of West meets East-it adheres to a traditional Japanese aesthetic and symbolism, while adapting to the local environment with the use of native plants and local materials. Dr. Kawana named the garden Shofu-en, or the "Garden of Pine and Wind." 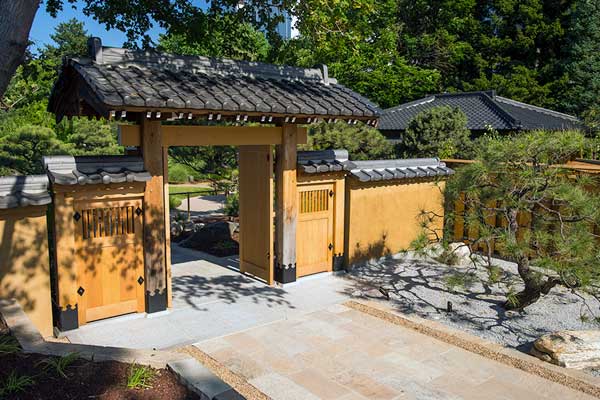 The entrance gate to Shofu-En.

The gate into the Japanese Garden acts as a threshold between the hustle and bustle of our everyday lives and the relaxing and contemplative space of the garden. The path beyond the gate meanders like a stream and invites you to slow down to enjoy the tranquility of the garden. 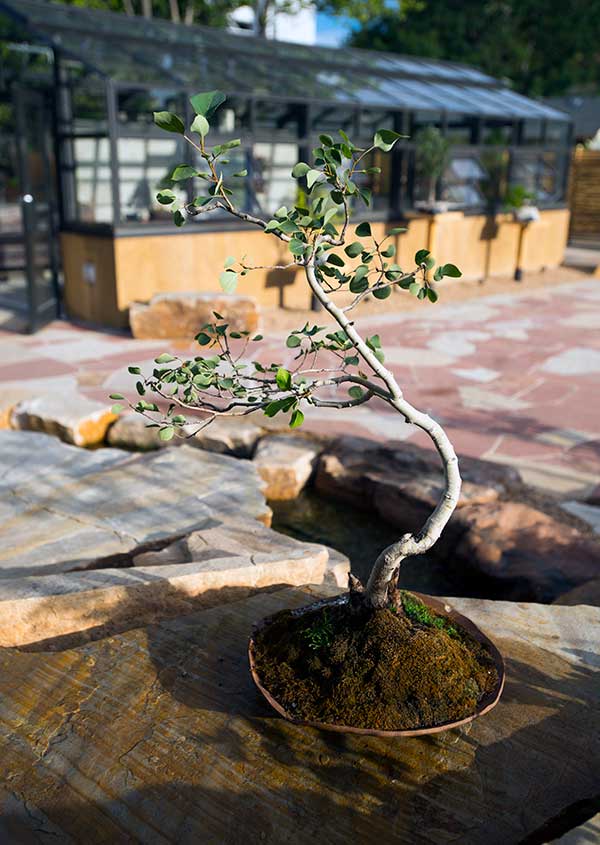 Bonsai are trees trained according to Japanese aesthetic principles, heavily inspired by nature. Inspiration comes from trees that have grown on the tops of mountains, enduring extreme conditions like harsh cold, wind, nutrient-poor soil, and lack of rain. These mountaintop trees develop a weathered and wise appearance that bonsai artists often strive to capture in miniature through careful pruning and training of their trees. 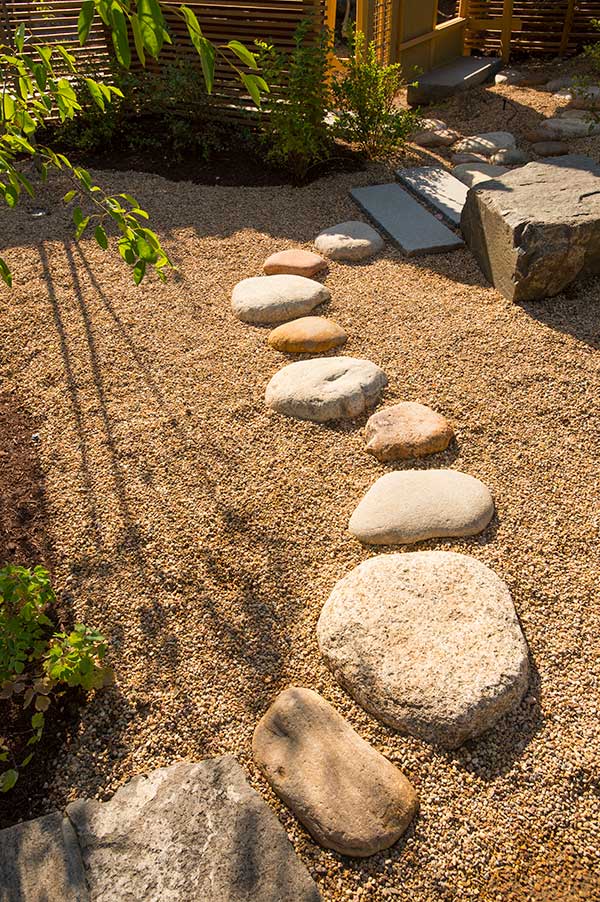 The Sand and Stone Garden at Denver Botanic Gardens.

The Sand and Stone Garden features the stark simplicity of stones rising from a bed of gravel, which is raked to suggest the sea. Straight parallel lines suggest calm water. The boulders suggest islands or mountains. This garden style is often found in Zen monasteries. 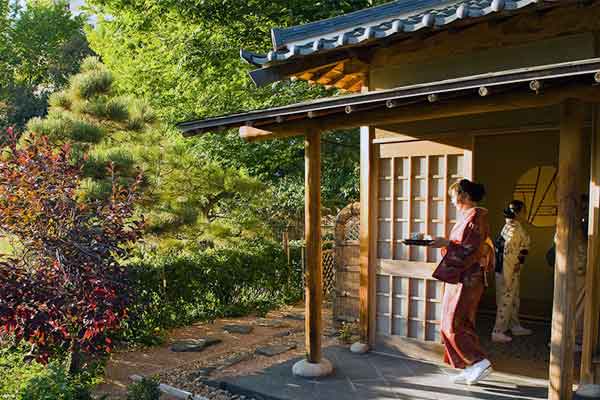 This is a tea house for Japanese tea ceremony. In a tea ceremony, the guests and host engage in a carefully choreographed ritual. There are many different types of tea ceremony, depending on the season, occasion, and formality. Many last for hours and take months of preparation. The passage through the tea garden to the tea house acts as a transition between the outer world of everyday life and the ritualized world of the tea ceremony. 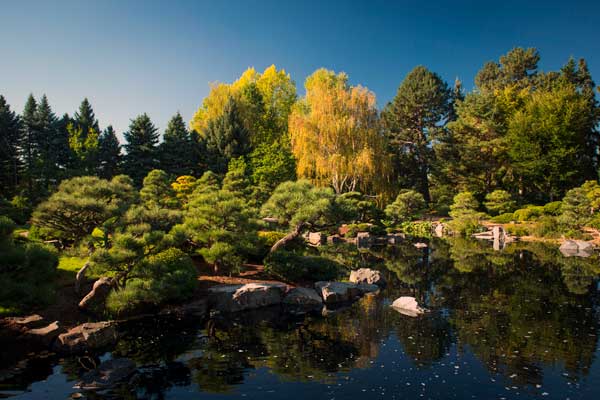 Islands are represented in Japanese Gardens in both literal and figurative forms. Here in Shofu-en, Crane Island, or Tsurushima, is at the south end of the pond, and Tortoise Island, or Kalneshima, is a rock at the north end of the pond. Japanese legend has it that the crane lives 1,000 years and the tortoise lives 10,000 years-both representing longevity and happiness. The rock next to Kalneshima represents a treasure ship, or kibune. 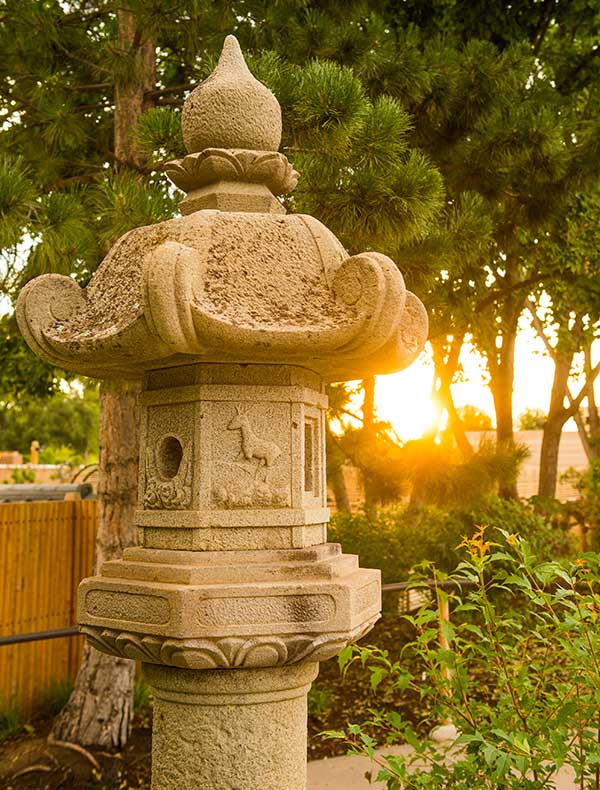 This 250-year-old lantern was donated in 1964 by Denver's sister city, Takayama, Japan. The style originates at the Kasuga Shrine in Nara, Japan, where there are over 3,000 assorted stone lanterns that are lit on special occasions. 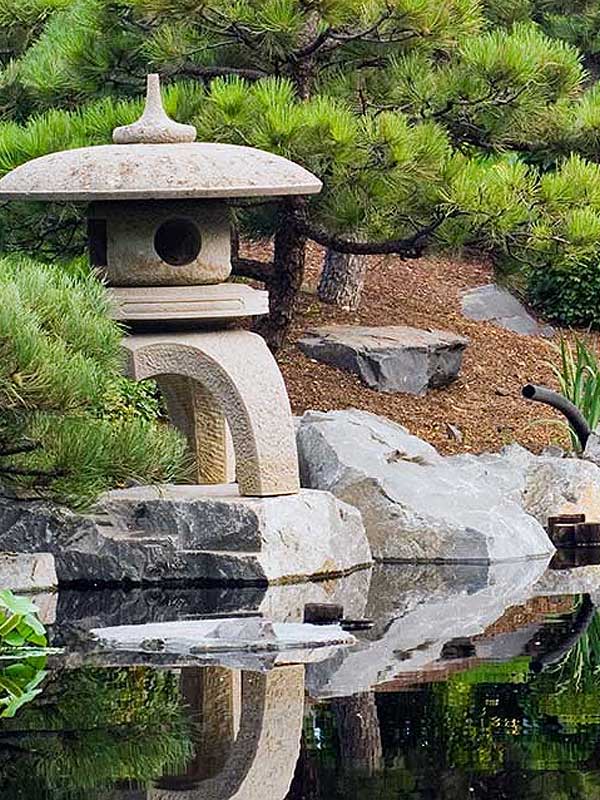 Snow-viewing lantern in the Japanese Garden.

Lanterns are meant to guide passage through a Japanese garden. This three-legged, umbrella-shaped lantern was also a gift to Denver from Takayama. These lanterns are traditionally set at the water's edge where, when lit, their reflection indicates the level of the tide to passing boats. 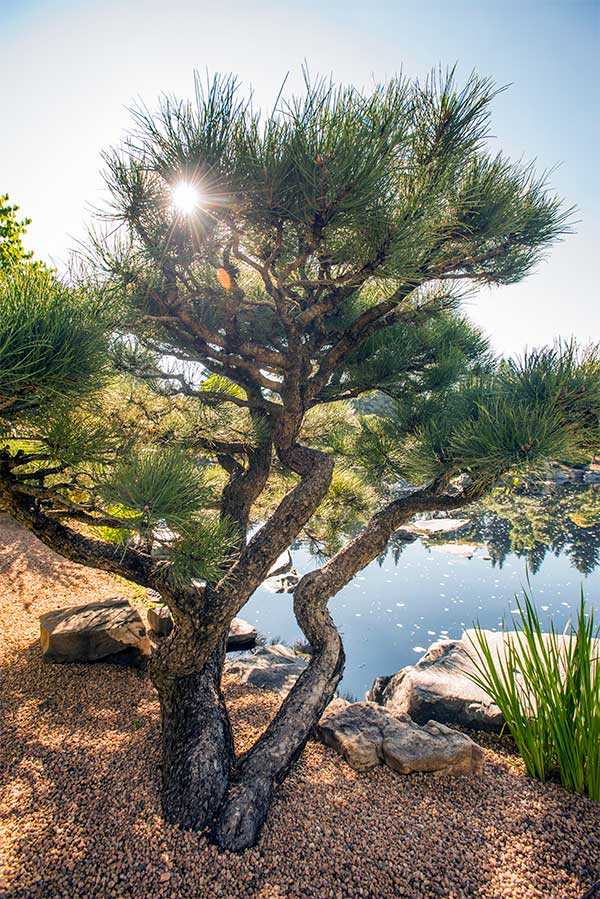 A character pine tree in Shofu-en

Most of the pine trees in this garden are ponderosa pines from Roosevelt National forest near Estes Park, Colorado. They were specially chosen for this garden based on their size and shape characteristics and are very carefully maintained. Some of the trees are over 500 years old.